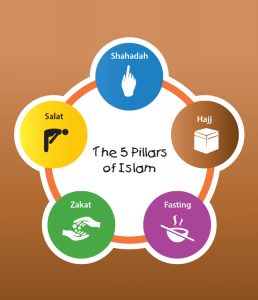 The practice of Islam means to submit your self to Allah. S.W.T. This submission is based on the tents of Islam which are called pillars of Islam. All Muslims should perform and take care of these five pillar of Islam . Theses are explained bellow:

This is first pillars of Islam and the most basic and fundamental aspect of Islamic Belief System. It says that there is no God but Allah and Prophet Muhammad S.A.W is his messenger. The profession of this make someone a Muslim and then he/she becomes liable to practice it through the whole life. It tells that Islam is the religion of one God who is Allah and that is the fact. It is stated in Arabic: (لَا إِلٰهَ إِلَّا الله مُحَمَّدٌ رَسُولُ الله) .

Every Muslim is supposed to pray fives times a day. Male are supposed to go to Masjid and pray there with all other Muslims and women stayed at home to recite it. Prayers are performed facing to Makkah and there are some conditions which are to be met before doing Salah. The prayer is symbole of submission and reverence towards Allah S.W.T as one stands ting hands in frond of Him, bowing down, kneeling, and touching the ground with forehead. On Friday all Muslims get to gather at midday for Jumma Prayer and then there is sermon Khutba as well. There are some other especially prayers for which Muslims gathered and these are Eid ul Fitar, Eid ul Adha, and Funeral Prayer.

Alms giving is the third pillars of Islam . It is mentioned in the Holy Quran many times and mentioned with the Salah as well. It is commanded to share the wealth with those who are less fortunate in the society of Muslims. It is obligatory upon those who have enough wealth and up to Nisaab, which is a scale to measure if you are under the obligation or not. If a Muslim reaches that Nisaab his must spare 2.5% of it for the poor. It is the right of poor according to the commands of the Holy Quran.

Muslim are expected to fast from dawn to dusk in the ninth month of Islamic calendar. That is the month of Ramdan and the fourth pillars of Islam . All elders men and women are expected to refrain from eating drinking and other forbidden things during day light time. Fast has a especial purpose that is to feel the pains of others who are hungry and thirsty. It teachers patience and tolerance. It is the source of nearness to Allah S.W.T.

The fifth pillar of Islam is the make the pilgrimage to Makkah. Those who are able and have financial resources to bear the expenses are supposed to visit Makkah once in their lives. This includes performing (Tawaf) seven rounds around the Kabah, drinking the Zamzam water, going to two rocks Safa and Marwa, visiting Minna and Arafaat. A Muslim who is visiting to Makkhah is also supposed to visit the Holy city of Madina and say Durrood and Salams to prophet Muhammad S.A.W.

We teach the kids about the pillars of Islam and especially prayers and the way how to perform. Let us know join and learn the Pillars of Islam